A hundred or more friends, including the Emmy-award winning actress Elaine Stritch, packed into the centre to hear tributes for the actor who died the previous November at the age of 44 from a brain tumour.

On the surface, there is not much of a link between Costacos, a bright light on Broadway, and the world of sport. And yet, dig a little deeper and the bonds become more tangible.

He was himself a gymnast of note who wore the national colours of Greece at junior level. He also performed at the Opening Ceremony of the Athens Olympics in 2004 and he was closely associated with one of the world’s greatest footballers George Best. To cap it all, he now has an annual half-marathon named after him.

George’s departure from the world of sport to the world of theatre happened when he went on a Fulbright Scholarship to the US to study physical education.

“I was a gymnast and wanted to study phys ed but theatre just kept popping up,” he told me in an interview with Athens International Radio in late 2007.

“One day I went with a friend to an audition when this lovely woman Susan Matthews, a choreographer, just walked out into the lobby, took one look at me and said: ‘you come and dance’.

“I said; ‘hey, I am not a dancer’ but two minutes later she grabbed me by the shirt and pulled me in and I was dancing which was very easy for a gymnast, it was like a warm up.

“From that I got to do a show and then I was cast in another show and the next thing I know is that seven years have gone by and I haven’t finished my degree in physical education. So I decided why not just get a degree in theatre and get it over with.”

Gymnastics’ loss was certainly theatre’s gain as Costacos went from strength to strength – although it was only when the curtain went up on his first professional show that he realised that no one would know him as George Costacos but, rather, as George Best, something that led to his connection with the late Manchester United and Northern Ireland legend.

“The name thing came about from my very first theatre job,” said Costacos.

“So my nickname became Georgie Best and the theatre assumed it was my real name and published it in the programme.

“The next thing I know is that I open up a newspaper and Cindy Adams, the syndicated columnist in the New York Post has written that George Best is off to Europe to write. 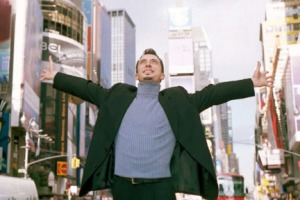 “This was me. Right below me was a piece on Harrison Ford and Candice Bergen, so it was a big deal My phone went crazy that day.

The newly-christened George Best, however, had no idea he was sharing one of the most famous names on the planet until the dawn of the internet age.

“I was one of the first actors to have a website,” he said.

“When the internet came along I bought the site georgebest.com. Well, you can imagine the amount of emails that came flooding in from people trying to get in touch with the footballer. That was when I began to realise who this guy was.”

Then, during the course of his one-man show Greek Gifts, a more or less autobiographical tour of his own life mixed with song. it, he chose to come out about his real name and that left him with a website to spare.

“At that point I thought now is the time to give this site to George but it was impossible to get hold of him.

“I tried and tried and in the meantime there were lots of people coming to me to try and buy the site. But I wasn’t really interested in selling it as I thought it belonged to the other George Best.

“So I held on to it until his family contacted me, unfortunately after George had died, and that is when I handed it over to them.”

As a thank you, the George Best Foundation, which helps with research into liver disease and alcoholism, made him their International Patron

“He was very supportive and interested in our work and his generosity in giving us the georgebest.com domain name will never be forgotten,” said Barbara McNally, the sister of the footballer George Best, who runs the foundation.

“I was very upset that I didn’t meet him (Best) as I researched him and realised what a genius he was,” said Costacos who admitted that he did not become a football supporter until 2004 when Greece won the European Championships.

That was also the year of the Olympics, when George was invited to be the only member of US Actors Equity union to take part in the Opening Ceremony. His image was issued on the official commemorative materials and he was commended on the Congressional Statement in Washington DC.

His final link with the sporting world came after his death. The mayor of his home island Aegina, Panayiotis Koukoulis, announced that they would stage stage an annual George Best Costacos Marathon in his honour. Since the first marathon in 2009, that has evolved into a half-marathon with this year’s event to be held on September 23.

This doesn’t make up for George’s early death; nor does the charity, the George Best Costacos Cultural and Cancer Research Foundation. But together they go some way towards keeping his memory – and the memory of the various causes he was involved with – very much alive.

A version of this article first appeared on Sport In Greece on March 20, 2009.