Ray Wolf, the last of the grandchildren of Edward Spender, founder of the Western Morning News, has died at the age of 99. A singer in Berlin during Hitler’s rise to power in the 1930s, she later worked for naval intelligence during World War Two.

Rachel – always known as Ray – was born in Hooe, Plymouth in October 1914, the fifth of seven children. Above her, Mary, Arthur, Honor and Ted; below Christopher and Tony. Her mother, Helen Frances Champernowne, was born and brought up at Dartington Hall, the last generation of Champernownes to live there.

Her father was Arthur Edmund Spender, son of Edward, founder and first editor of the WMN, who had drowned in 1878 with his two eldest sons.

Edmund was also a journalist who served on the board of the Western Morning News. He also spent a year in 1908-09 as Mayor of Plymouth. He died in 1923 of a burst appendix when she was just eight.

Her early years were spent around Plymouth and Dartmoor. One of her earliest memories was the “huge thuddering clash“ as she and her mother rang the church bell on Armistice Day 1918.

After studying domestic science, she decided music was her calling. From 1935 to ‘38 she studied singing in Gissen, near Frankfurt, and in Berlin. Hitler was already in power and Ray watched helplessly as her teacher lost her opera students one by one; they were ordered to go elsewhere as the teacher was not a member of the Nazi party.

Ray considered the brownshirts “just thugs” and put her foot down at her mother’s suggestion she return home.

“There’s no music in England!” she insisted, changing her mind only when her mother enticed her with a ticket to Glyndebourne – a programme that included Verdi’s Macbeth and the Mozart double of Don Giovanni and Marriage of Figaro.

When war was declared, Ray worked for the Red Cross at Bovington Camp in Dorset before transferring to Salisbury where she was a nurse. In 1941, she joined the Wrens.

She learnt Morse – when training she said that even the birds seemed to sing in Morse “da dit de da da” – and as a fluent German speaker she found herself working with intelligence. On being posted to Abbotscliff near Dover, she worked 24-hour shifts alone in the tower taking radar bearings and plotting the position of German ships. 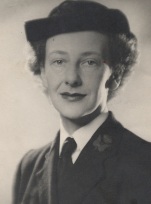 On one occasion a German fighter plane was flying so low that the pilot leant out of his cockpit and started firing his pistol at her, prompting a swift leap into a bed of stinging nettles which offered some prickly cover.

She also intercepted messages from E-boats and submarines in German and Morse, and sent these through to Bletchley Park for decoding.

After D-Day, Ray was sent to SHAEF (Supreme Headquarters Allied Expeditionary Force) in London to look through captured German documents. She then volunteered to go to France where she was again a sought-after translator.

Throughout the war, she sang for the troops, collecting a good review from the Kentish Observer and Canterbury Chronicle for a concert in which she appeared in May 1944.

“A notable inclusion was the appearance of a Wren Petty Officer who charmed the packed audience and who is familiar to hosts of radio listeners – Ray Spender, soprano … An appealing figure in a dark evening gown and a hundred per cent smile, she was certainly one of the hits of this outstanding show.”

She had a clear high soprano voice and sang professionally for years – lieder (her great love), opera, and light music on BBC radio with The Stargazers (see below) and Cliff Adams Singers.

On her return from France in 1945, she married Simon Wolf, whom she had met three years earlier on the promise of a decent cup of coffee. Simmy was a Polish Jew, the only member of his family to survive the Holocaust and, like her father and grandfather, he was a journalist.

After the war, Ray settled into married life but in spite of having two children, she also found time to work as a German translator and British Council Guide.

Widowed in 1966, she remained busy, learning Hebrew and working on a Kibbutz, training as a music teacher and working for the British Legion.

She also enjoyed entertaining. Her dinner table in north London was a regular venue for lively exchanges on politics, history, culture and laughter. All topped off with music. If guests missed the last bus home, Ray would often sleep under the dining room table so she could give them her bed.

She was fiercely independent, living alone and negotiating the London bus service, until she was 98 when she moved into a care home.

Ray is survived by her two children, Nick and Francesca, two grandchildren and two great-grandchildren.