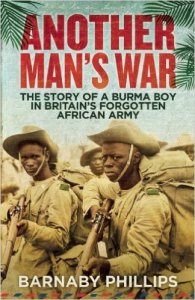 This is how it starts:

“Scores of Rohingya Muslims are fleeing to Bangladesh because of a military crackdown in western Myanmar, according to residents and Bangladeshi army officials.

Some of the Rohingya were shot as they tried to cross the Naaf River that separates Myanmar and Bangladesh, while others arriving by boat were pushed away by Bangladeshi border guards, residents quoted by Reuters news agency said on Wednesday.

A total of 130 people have been killed in the latest surge of violence in the country, according to the Myanmar army.”

It is the kind of story that a week ago I might have skipped through. But, having read Barnaby Phillips’ book, I stayed on the page, read through and have been following the story since.

That is the power of a good book that explains the roots of a contemporary conflict.

Barnaby Phillips is a seriously good journalist, having worked for many years for the BBC and more recently for Al Jazeera. His television reporting gets to the heart of the story, his boyish looks hiding a tigerish journalistic reflex.

Here, he focuses on the ordeal of Isaac Fadebayo, one of the 100,000 African soldiers drafted into service by the British to fight in Burma during World War Two.

It is a story that Phillips knows well, having made a 2011 documentary for Al Jazeera called The Burma Boy.

The young Nigerian is caught in an ambush by the Japanese in 1944 on the banks of the Kaladan river and left for dead. And yet, thanks to the efforts of another soldier, David Kagbo from Sierra Leone, and the kindness of a local muslim man, Shuyiman, and his family, Isaac pulls through.

It is an extraordinary tale during the telling of which Phillips weaves in the story of how the West Africans got involved in Burma as well as the broader Burmese campaign.

At least that is the first part of the book. In the second part, Phillips does move towards the centre of the stage as he attempts to round Issac’s circle and find the family of Shuyiman who harboured the two Africans at immense risk of discovery by the Japanese and all that entailed.

It is an equally thrilling adventure that takes him down river and behind the lines of modern Myanmar. It is a passage that allows Phillips to outline the fault lines within the country, the faults that are creating today’s headlines.

Another Man’s War is as much about the repercussions of war as about the actions of war. It is not just about how one man built on his escape from death to become a respected figure in his community, it is broader than that.

It is about how Nigeria and Burma both found strength in the Second World War to break free of the British Empire, it is about how the conduct of armies 70 years ago and the prejudices, based on the unsteady platforms of religion and nationalism, have moulded a conflict that we still feel in 2016.