It was my fault. I had been warned enough times by people who had been through the experience themselves.

“Be prepared to be disappointed,” they said. “He doesn’t play any of his old stuff, just the recent bluesy songs. He plays for himself.”

For himself or with himself, I wondered as Dylan and his band approached half-time in the first of their three sold-out shows  at the Grand Rex in Paris.

I looked around at some of the faces in the audience. The older fans, like me, must have been crying out for some nod in the direction of the days when Dylan was actually relevant as an artist.

Some of the younger fans relaxed into the show, perhaps they were more au fait with his more recent bodies of work, cheering and hooting every song.

And then I saw a father who had brought his three young children, all under ten, for what I imagined he was hoping would be a seminal moment for them, that day they could tell their grandchildren about – “I saw Bob Dylan play live”. 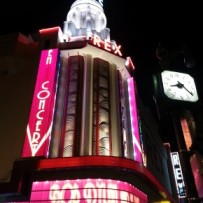 I did something similar with my kids some years ago in Athens when they were five and six. We took them to see Leonard Cohen. We were up on the rail, the Webb Sisters blew kisses and waved at them, Cohen produced a show which blended his more recent songs with the old favourites. It was a great show, a memorable show.

My kids that day at Malakasa were blessed. These kids at the Grand Rex were short-changed. They may not have realised it but I could sense the overwhelming disappointment in the father’s eyes that he couldn’t share a Dylan classic with his kids. And they were paying 120 euros each for their tickets.

What those kids got was an imitation Bob Dylan, a performer who appeared to be content to take the money but give little back in return. When was the real Bob Dylan going to step out of the shadows and cast aside this interloper?

Or was this, in fact, the real Bob Dylan?

Dammit, I felt short-changed. I have listened to His Bobness since the 1970s. Bringing it All Back Home is possibly my favourite album of all time with Desire and Street Legal not far behind. He has written some magnificent songs. Why doesn’t he want to share them with us?

We didn’t need to hear a Greatest Hits show; every artist moves on and produces new work, but I suspect we were all hoping for more of a balance in his set list. There was a barely recognisable version of She Belongs to Me, wrecked rather by a poor sound system that had the harmonica raising the dome of the theatre while fingers slipped into ears around the auditorium.

Later, in the encore, he gave us All Along the Watchtower and Blowin’ in the Wind.

From the start, though, he appeared to be in his own personal bubble. Surely, I thought, he is going to say something to the audience and crack into an old favourite to get the aisles really rolling, perhaps a “Thanks for coming, great to see you all, let’s have a great night, the first time I was in Paris bla bla bla…”

We appeared to be irrelevant to him, a cash cow, nothing more.

After 45 minutes, he did finally approach the front of the stage.

“Merci beaucoup,” he mumbled in that voice of sand and dried-up glue. The crowd roared back at him “Bon soir, Bob”. Was this the start of a warming, of a brief moment of repartee with the crowd? Not a flicker.

“We are going to take a short break now.” And he was gone.

And that was it.

At half-time, queuing for a beer, I overheard two suited Frenchmen discussing the performance.

“I don’t think he wants to be here.

“Did you see Neil Young in the summer?

“Bercy unfortunately but it didn’t matter. It was incroyable. A magnificent show. He really connected with the audience.”

Connection. That was it. Neil Young, Bruce Springsteen, Patti Smith, Leonard Cohen. They all get it. But not Dylan. There was no connection. Perhaps there never has been on stage.

The words of Like a Rolling Stone came flooding back:

“You used to ride on the chrome horse with your diplomat
Who carried on his shoulder a Siamese cat
Ain’t it hard when you discover that
He really wasn’t where it’s at
After he took from you everything he could steal.”

Except he didn’t want to give us that one.

His Bobness was up on the stage; ergo he had the right to play and do whatever the hell he wanted. If we didn’t like it, tough, we had already paid through the nose. Plenty more suckers to squeeze into those comfy chairs.

The second half was marginally better and, needless to say once the audience leapt out of their seats and ran down to the front for the encore, there was suddenly an atmosphere. But it was too late.

The playing was tight throughout. Dylan had a terrific band supporting him although given that he couldn’t be arsed to introduce them once throughout the evening, I don’t think I can be arsed to google them.

Perhaps this is the way Dylan has always been.

He remains a legend, an icon of twentieth century music. I will carry on listening to the CDs, whether it is Hard Rain or Together Through Life.

But I will not pay to see him live again and nor will I dream of taking my children. He isn’t worth the entrance money. He wasn’t really where it’s at.