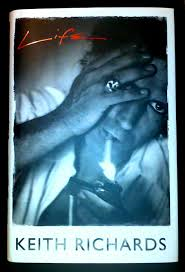 Once upon a time, before he became an international rock ‘n roll star and embraced everything that went with it, Keith Richards was a boy scout. He was also a choirboy who sang for the Queen.Then came a meeting with Elvis Presley’s Heartbreak Hotel and a voice-breaking dismissal from the school choir, and the rebel within escaped his chains. Keith Richards was born.

For diehard Rolling Stones fans then there may not be much in Richards’ autobiography Life that you don’t know already. The chance meeting on Dartford railway station with his old primary school friendMick Jagger, the work with Ian Stewart, persuading Charlie Watts to come on board, the early years of runaway success, the birds, the booze, the bust, the drugs, the death by drowning of Brian Jones…it is all here in Life. But as I say, you probably know all of this already.

If you are not a Rolling Stones fan, then you perhaps don’t know the flesh and blood on the bones of the news reports you may have read over the years. Certainly, unless you have lived beyond the compass of Planet Earth these last fifty years then you will know of the Stones. You may not like them but you will know of them.

You will know the names (Jagger and Richards are on a par with Lennon and McCartney), you will know a good many of the songs perhaps even without realising it was the Stones.

Even the judges and clergyman out there who may have raised an eyebrow and sucked their teeth in scorn at some of the band’s excesses (real or imagined) have probably swayed, perhaps even danced embarrassingly at a relative’s wedding at the strains of the covers band beating into submission some classic numbers like Start Me Up, Angie, Satisfaction and Tumbling Dice.

Love them or leave them, the Stones have been a massive cultural influence since the early 1960s. For that reason alone, Life, rather like Margaret Thatcher’s memoirs, are worth reading. The fact it is written spectacularly in the Richards vernacular (think Jack Sparrow in Pirates of the Caribbean, a character Johnny Depp based on Richards who actually appears in the third film as Sparrow’s dad) gives it spark, energy and a great deal of humour.

Richards know that he isn’t an angel. He details in some depth with the joys and the tribulations of drug addiction that shadowed him for over twenty years.

“Once you’re a junky, your smack’s your daily bread. You don’t really get off anymore that much. There’s junkies that keep upping their dosage, and that’s why you get ODs. To me, it just became maintenance. It was to set the trend for the day.”

He is perhaps too honest in the way he describes how he stole Anita Pallenberg away from Brian Jones as his bandmate lay ill in a Spanish hospital.

“In the back of the Bentley, somewhere between Barcelona and Valencia, Anita and I looked at each other, and the tension was so high in the backseat, the next thing I know she was giving me a blow job. The tension broke then. Phew. And suddenly we were together.”

Some things should perhaps be kept between two people.

He is equally vivid about Pallenberg’s later addiction and how it contributed to the end of their relationship.

By contrast there is relatively little about the death of Brian Jones who appears as a marginal figure in the early Stones, certainly not a close friend of Richards who comes across as someone who places great weight on relationships.

And way beyond Pallenberg or even his wife Patti Hansen, is the musical marriage he has had with Mick Jagger.

From the kids with a shared love of Chuck Berry and Muddy Waters to the unpromising start of their song-writing career when they were locked in a Willesden kitchen until they came up with something (As Tears Go By which was a hit for Jagger’s girfriend Marianne Faithful), through the incredible ups to an almost inevitable parting of the ways.

“I love the man dearly . But it was a long time ago that we could be that close. We have a respect, I guess, for now, with a deeper under-rooted friendship. Do you know Mick Jagger? Yeah, which one? He’s a nice bunch of blokes. It’s up to him which one you meet.”

Jagger’s diversion towards a solo career in the mid-eighties almost spelt the end of the Stones and in spite of the bitterness that stirred up in Richards, it also offered him some of his finest hours musically. He played with Chuck Berry, set up the X-pensive Winos, organised the Wingless Doves, a group of singers and musicians around his home in Jamaica.

Their relationship must be strong to survive because Richards pounds Jagger relentlessly in Life, knowing all the while that when the time is right they will be back up on stage together, sixty-year-olds playing at teenager and loving every minute of it.

He also rails at the technopyrics that Jagger was eager to introduce into the recording studio, the breaking down of the parts to try and gild an ideal of Stones’ perfection.

“This idea of separation is the total antithesis of rock and roll, which is a bunch of guys in a room making a sound and just capturing it,” writes Richards.

“It’s the sound they make together, not separated; This mythical bullshit about stereo and high tech and Dolby, it’s just totally against the whole grain of what music should be.”

Behind all of the tales of sex and drugs, it is the music that underpins everything, the sheer joy of picking up a guitar, hooking up with like-minded folk and creating something with life and rhythm. It is for others to judge Richards’ place in the guitaring firmament but what comes out of Life is this pure and simple love of music and, indeed a love of life.

“I’m not in show business. Playing the music is the best I can do, and I know it’s worth a listen.”