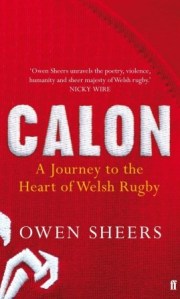 The Green Man Festival is a wonderful occasion. It takes place every August in the gentle, rolling foothills of the Brecon Beacons, just outside the village of Crickhowell. It is a music festival, predominantly folk-rock if you will, complete with tents, burgers and lengthy lines of beardy blokes with sandals and a copy of the Guardian waiting patiently for the portaloos.

It is terrific. Great fun. Much to recommend it. And that is before we even mention the real ale, stand-up comedy, veggy food to die for, juggling, fireworks, more music, cinema and, tucked away on the outfield, literature.

And that is where I first came across Owen Sheers and his book Calon: A Journey to the Heart of Welsh Rugby.

It was an accident. I was waiting in one of those lengthy lines for the portaloo – yes, if you must know, with a copy of the Guardian tucked under my arm – when I just happened to catch a drift of someone mentioning the name of George North; of a lilt and poetry that carried itself on the gentle breeze, ducking the quavers and semi-crotchets skidding across from the music stages. It wasn’t Richard Burton, sure, but then no one is Richard Burton when it comes to romancing and seducing the English language. Nonetheless, it carried a lyric edge and nuance of the valleys.

“Wales, like all nations, is an idea,” sang the voice. “A concoction of history, landscape, temperament and language. This afternoon George, and the twenty-one young men also boarding that dragon-painted coach, will become that idea. For eighty minutes, under the eyes of millions, they will become their country.”

I dragged my ten-year old son over to the tent and together we sat and listened to Sheers reading excerpts of Calon and talking warmly and vividly about the six months he spent as writer in residence with the Welsh Rugby Union.

It was a period which followed the disappointment of a semi-final defeat at the hands of the French at the 2011 World Cup; it takes us on a journey through the 2012 Six Nations, when they took their revenge on the French in the final match to claim the coveted Grand Slam, and on to Wales’ three-test tour of Australia that followed (an epilogue that we, as well as the players that went on it, could probably have done without).

Sheers is a poet. Literally. In the sense that he has had volumes of poetry published. In real books. And people have bought them. He is also a novelist; he received great reviews for his first novel Resistance for which he wrote, the screenplay. And he has a few plays under his belt to boot. The man can string a sentence with the fluidity of a Scott Williams’ rip and sprint.

But does he get to the heart of Welsh rugby?

That depends on whether the heart of Welsh rugby lies purely in the multi-million pound machinery that surrounds the national rugby team these days. Or whether the heart is actually the thousands of men, and increasingly women, who turn out week in week out for the local club with no thought of money, other than as to whether they have enough in the kitty for another jug of beer. That is perhaps a question best left to the pubs and rugby clubs of Wales. I may have married Welsh but I would never presume to speak for them.

To be fair, Sheers does well is to fuse the different parts of the machinery. So we get to know many of the players like North, like Leigh Halfpenny or Scott Williams or Adam Jones as well as the coaches (there is a wonderful portrait of Neil Jenkins) and backroom staff; J.R. the kit man; Michael “a wiry seventy-five-year-old” who works with the ground staff; and Roger Lewis, the CEO with the musical heritage. They are all there and they are all heroes.

And that perhaps is the problem.

Rugby, like any sport, can produce moments of pure drama and romance that are the equal to anything you will find on the stages of London’s West End. But not everyone in the cast is a hero. Not everyone is a Leonidas. In the dynamics of any team there are always the Iagos, the conniving, awkward bastards or a Faustus whose self-interest and self-indulgence threaten the equilibrium of the team. Just look at England’s cricket team.

The book that turned me on to sports writing many decades ago was The Glory Game by Hunter Davies. This is a brilliantly written account of a season he spent with the Tottenham Hotspur team of the early 1970s. It is immediate, in parts lyrical, always dramatic, whether it is the pain of defeat or injury or simply a player being, to use the vernacular that crops up regularly in Davies’ masterwork, a complete and utter wanker.

Sheers, on the other hand, is almost too kind to everybody. They are all marvellous. Not just everyone in the team but everyone in Wales. Of course, there are two main differences between Sheers and me. One is that this fellow is a writer rather than a hack and the other is that he spent all these months with the team so he knows them a hell of a lot better than I do.

So, either they were all bloody marvellous, which is nice for humanity but removes an important cog in the dramatic wheel, or there were a few darker characters who have been glossed over in order to produce a nice book. If that is the case then it is just a shame because the book then tips towards dream story.

Calon takes us through three of the five matches that the Welsh team plays – for some reason Sheers skips the Scottish and Italian games – with the book framed around the matchday build-up for the grand finale against the French.

The atmospheric writing is superb. He brings a lyrical eye to the way that Cardiff alters character on match day; everyone is conscious of the game, everything revolves around the game. Sports lovers anywhere in the world from Melbourne to Munich, Miami to Mumbai will empathise with the way he evokes beautifully the idea that match day is a kind of Sabbath.

“Because of its cathedral-like position at the centre of the city, an international match at the Millennium Stadium triggers an intensification of Cardiff’s population, rather than a dispersal. Like a roosting starling murmur tightening on the wind above a wood, so Wales contracts about the stadium on a match day.

“From early morning until late at night the resonance of those eighty minutes electrify the city.The streets pulse with an ever-inward movement as trains and buses from across the country bring the stadium’s crowd into Cardiff…Today many of those arriving will not even have tickets to get inside the stadium. But they will still want to be here, to watch on big screens in the civic areas and in the pubs and clubs, to be within sound and sight of the arena where it, whatever it may be, will happen. They want to be here to drink, to share and to feel themselves more than themselves, as if by being closer to the stadium they are somehow closer to an idea of Wales.”

At the end, though, the climactic drama falters, perhaps because while we know plenty about the boys in red, we know nothing about the boys in blue. The French are mere whispers, on the stage only to act as the fall-guys for Sam Warburton and the glorious red army. As Arthur Conan Doyle needed to put some flesh on the bones of Moriarty to make him a decent adversary for Sherlock Holmes, so Sheers needed to build up some of the key characters in the French team to give this final contest drama.

Rereading this review, it may appear that I don’t like the book. This is not the case. I relished it. Rugby is not on a par with the likes of cricket, baseball or even boxing when it comes to literary writing. Perhaps the reality of the cauliflower ears and the clawing for breath at the bottom of the ruck have found rugby writers – with the exception perhaps of the late greats Frank Keating and Con Houlihan – wanting in the poetry department.

It is terrific, therefore, to hear a voice that raises it a touch beyond the thud and blunder of the rest of us.

And if you get the chance to hear Owen reading, preferably on a sunny afternoon at the Green Man Festival with the strains of the Ramshackle Union Band or Veronica Falls drifting across the Brecons, then don’t hesitate.