Some time ago, in the dim and distant past that was the 1980s, I was in a Dublin University Players’ production of John Webster’s The Duchess of Malfi.

It was really a very good production, directed by Declan Hughes, later to make his name as a playwright and crime writer, and starring the excellent Rosemary Fine as the Duchess. Two other familiar names in the cast were Darragh Kelly, a regular at the Abbey and many other theatres since, as Bosolo and Ian Fitzgibbon, now a film director, as one of the murderous brothers.

I have a feeling that the cast also included future Booker Prize winner Anne Enright and another film director Mary McGuckian.

I had the less thrilling role of Antonio, the schmuck who secretly marries the Duchess and ends up on the end of a sharpened poignard. It is not exactly above the titles as a role but it did afford me one speech that has stayed with me to this day.

It comes early in Act V as Antonio and Delio pass through the ruins of an old church. Antonio muses on the transient nature of human life and the histories that lie under every stone.

“I do love these ancient ruins.
We never tread upon them but we set
Our foot upon some reverend history.
And, questionless, here in this open court
Which now lies naked to the injuries
Of stormy weather, some men lie interr’d
Mov’d the church so well, and gave so largely to’t,
They thought it should have canopied their bones
Till dooms-day. But all things have their end;
Churches and cities, which have diseases like to me,
Must have like death that we have.”

This speech comes bubbling up whenever I am in touch with history. When I was in Athens and Sparta for this year’s Spartathlon, it was all around us.

Lying eyes closed in the September sunshine on a slab of stone in what was once the palace in Sparta, I mused on the thought that maybe this was where the lovely Helen of Troy – she with “the face that launched a thousand ships” – whispered sweet words of love to her husband Menelaeus or flirted with her toyboy Paris.

The same goes for the various treks I have made through the battlefields of the Somme or Ypres; Crecy or Agincourt. Once, perhaps just for a day, these places were at the centre of the world. Now they lie tranquil, almost forgotten.

A couple of weeks ago, came back to me again, rather unexpectedly, as I stumbled across a piece of history which was totally new to me; a piece of history that blazed across world headlines for a few days but is now remembered only by a small plaque by a tree in the corner of a French onion field.

It was a glorious sunny September evening. My daughter was having her riding lesson at a stables on the edge of a village called Saulx les Chartreux, around five kilometres south of Orly airport on the outskirts of Paris.

As she and her group went for a short ballade across the fields, I followed at a distance. And then stopped at the tree. 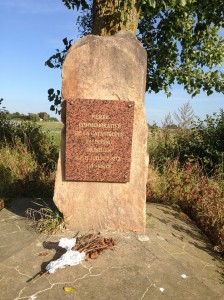 Just in front of it was a stone and a bunch of dead flowers beneath a plaque.

I read the plaque several times, looked at the surrounding fields, and heard the silence. It didn’t make sense; this bucolic scene, the horses marching in Thelwell tranquillity through the harvested fields, children laughing, whisps of cloud lightly smearing a perfect blue sky.

I struggled to imagine the noise, the heat, the terror and death of that July day.

Then a plane arced overhead on its way to Orly airport, leaving the vapour trail to disperse and join with those whisps, and the words on the plaque began to make sense.

The story starts in Brazil. Varig flight 820, a Boeing 707-345C, taking off from Rio de Janeiro in the middle of the night on a scheduled flight to Paris Orly.

On board, 17 crew and 117 passengers including the Olympic sailor Jorg Bruder, singer and composer Agostinho dos Santos and in an odd quirk of political even-handedness the right-wing politician Filinto Muller – president of the Brazilian Senate – and the left-wing Argentinean revolutionary José Joe Baxter.

History doesn’t relate which of those 117 passengers felt the urge when the plane was over France and closing in on Orly to clamber out of his (or her) seat, stroll down to the rear of the plane and wait for the toilet door to open; was it seconds or moments before another passenger emerged and the man/woman stepped inside?

Who was it that tapped the end of the packet and slid out a cigarette; flicked the lighter and sucked in deeply, feeding the craving for a nicotine hit? It may just have been one or two puffs to silence the monster, then a quick stubbing out and into the waste disposal with the remainder of the cigarette.

After that, wash the hands, splash the face and leave, shuffling once more down the cabin to find the right seat. Maybe a stretch, a quick chat with the passenger in the next seat and seatbelts on, ready for landing.

Just a quick smoke, that’s all. Never hurt anyone, right?

Within moments, the smouldering cigarette found a source of life among the many paper towels that had been used during the course of the flight. It sparked into flame, the fittings began to melt and burn and thick black smoke began to creep under the door. From there it was just five minutes until disaster struck. Perhaps less for the passengers in the cabin.

At three minutes to two in the afternoon, the captain, Gilberto Araujo da Silva, was unaware of any problem. He was given his approach orders by the Orly control tower and started the regulation descent.

A minute later he got back to Orly to report a “problem with fire on board” and was immediately given permission to make an emergency descent and dropped to 3,000 feet and then 2,000.

By this stage the cabin was filling with thick black smoke, the passengers coughing and spluttering, clawing for breath. And then falling silent. The crew bundled into the cockpit, donning their oxygen masks, but the smoke was creeping in there too, making it impossible to make a visual approach all the way to Orly.

“I was a volunteer fireman at the times in Etampes (a few kilometres south of Saulx)…I was 17 years old,” a man who calls himself Firsty wrote on a web forum dealing with the crash in 2011.

“We were in the heart of the station. The aeroplane passed just over the top of us, on top of the building. We asked each other why it was flying so low…One or maybe two minutes later the siren went off.”

At three minutes past two, just five minutes after being given the all clear to land, the captain decided to crash land in the onion field.

The landing gear was down with the flaps at 80 degrees.

According to the accident report on Aviation Safety Network the Boeing “approached with considerable nose-up attitude, in a slight left bank”.

“The aircraft truncated some small trees and made a heavy landing on a field. Both main gears collapsed and the engines were torn off in the subsequent skid. The fuselage however, remained intact.”

It was in many ways a brilliant piece of flying and landing by the captain.

The ten crew members who had managed to huddle into the cockpit were able to escape.

The tragedy lay in the cabin where the passengers sat immobile in their seats. Asphyxiated by the smoke, very probably dead before the plane hit the ground. And the fire continued to rage.

Farm workers ran across the field to lend a hand but couldn’t get near the fuselage. It was six minutes before any fire engine could reach the crash site.

“The traffic was completely blocked,” explains our 17-year-old fireman.

“Most of the fire engines couldn’t get through. The engines from Orly left to try and help but they hadn’t realised the traffic jams and they were all blocked.

“My boss, Lieutenant Brunet, decided to drive through the surrounding gardens to get to the site.

‘The roof of the plane was on fire and was collapsing on the passengers who were already dead. The access doors were welded to the fusilage. It took many hours to cut a way in.”

The firemen did manage to evacuate four people who were unconscious but only one survived, making a total of 11 survivors.

It was perhaps more than might have been expected.

“I take my hat off to the pilot who did what he had to do,” says the fireman. “He stayed right there to bring down his Boeing. He had to but it is not easy with 11 people (sic) sitting on your lap.”

Da Silva was indeed a hero even in spite of the fatalities. Sadly he was not so fortune six years later when the cargo plane he was flying disappeared on a flight between Tokyo and Rio.

The fireman also revealed how the trauma affected those at the scene.

“I do not have good memories of this tragic event. There was no psychological support and we just had to deal with it.

“Whenever I’ve told this story people seemed to think I was a pathological liar. It was very distressing for many of us. It turned our lives upside down.”

Every air crash seems to signal a change in flight procedure. Varig Flight 820 was no different. Following the investigation, which put the cause of the fire down to a fire caused by a cigarette in a rear toilet,

The French commission of inquiry rather feebly recommended that passengers should be warned of the dangers of smoking in the toilets. It also called for the provision of fewer inflammatory objects in the toilets and more oxygen masks “near the toilets”. 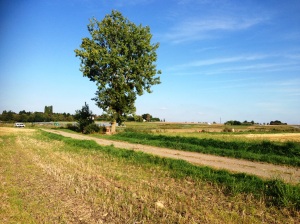 I was back at the riding school this afternoon. A low October sun dipping over the hills casting a golden shadow over the fields. A labrador picked his way between the stubble in the field, sniffing, stopping and carrying on in his own canine way.

My daughter’s class came to an end. The four horsemen of the apocalypse slipped off their mounts and led them away to the stables. Their coach, Anne, leant by the paddock gate and lit up a smoke. I asked her about the crash.

“Yes, yes. It happened here. Right here by the tree,” she says. “People around here still remember. And every year they come on the anniversary. They still remember. They leave flowers…Difficult to imagine isn’t it.”