It has taken 114 years but now I feel, at last, I can look my grandfather in the eye. Not literally, of course – he died back in 1923 when my own father was just a wee bairn of three – but journalistically.

It comes down to a question of snow. Back in 1900 and 1901, Arthur Edmund Spender went to Norway to cover the Holmenkollen Ski Festival aka the Norwegian Games which later transmuted into the Winter Olympics.

Up until this week, even after 26 years as a sports hack, I had never covered a winter event. Not properly. Not to the point where you take the ski lift to the top of the jump and peer vertiginously at the slide down which these seriously left-field individuals hurl themselves. Not to the point where you high five the cross-country skiers before a race and chat intimately with the waxers as they prepare the skis.

But that changed at the end of last month in the Slovakian resort of Strbske Pleso, high in the Tatra Mountains, as it played host to the Nordic events at the 27th Universiade aka World Student Games.

There is a gentle rider to this as I did work at the last Winter Universiade in Trentino at the back end of 2013 but on that occasion my colleagues and I barely left the press centre, never crushing the powder of the slopes beneath our boots. I was in Trentino but not really at the Games. This was different.

This time I was suited up by Eurosport in the latest ski gear, a far cry to the tweed jacket that my grandfather had to make do with, and sent off on secondment to FISU, the governing body, to serve as a commentator or the official web stream.

There were three of us; Andreas Evagora was detailed to cover the ski-jumping, Anthony Jeffers had the daily drive to Osrblie to take on the biathlon while I had the pleasure of the cross-country events.

FRESH SNOW FOR THE COMMENTATOR

Taking on a new event can be daunting as well as exciting; it needs plenty of preparation; time spent watching and listening to other commentaries to pick up on some of the nuances, recognising the key questions to ask before the race.

Much of my prep went into researching and practising out loud the pronunciation of every member of the Russian team. Men and women.

They were, by and large, a different class to the others, several with Olympic and World Cup experience. They were going to figure largely. As it was, the men mopped every single individual medal available as well as the team relay. And had it not been for the impressive Kazahk Anastassiya Slonova, who won the sprint and the 15 kilometre, the Russian women would have done the same.

People perhaps underestimate the prep that goes into commentary, especially at an event like this which is a long way from the public eye and the mass media. It is impossible to know everything about all 90 skiers who started the men’s 10 kilometre but it is important to know something, even if it is only how to say their name. Somebody watching in Korea or Ukraine will notice.

Perhaps the most fundamental thing is to find the right expert and cajole them sweetly into joining you in the commentary box. And this is where I got lucky. After a breathless solo stint on the individual sprints I managed to persuade Fiona Hughes to join me for the team sprints.

Originally from Huddersfield, Fiona is currently doing a Masters in Civil Engineering at Cambridge. Had there been a spotlight from Fleet Street then it would have been firmly on her as she was the sole British representative in this first part of the Universiade which left her a little forlorn as she followed Lulu, the local liaison who carried the Union flag, into the stadium at the Opening Ceremony; a larger contingent went to part two in Granada.

Fiona’s results may not have had the presses rolling with a late Stop Press but her commentary was terrific, her insights into the course and the technical aspects of the race way beyond anything I could give the audience. Her Yorkshire accent made a lovely contrast to my own southern drone. Having said that, I suspect many of our non-anglophone viewers may have been puzzled about the constant references to “snerrrrrr”.

Later in the week I had two other helpers. Randy Gibbs is one of the top waxers in the business, a veteran of the US team that went to the Vancouver and Sochi Olympics and now working with the Australian students.

“I just had a daughter and when that happens the travelling gets a bit too much. This suits me much better,” he explained.

And last, I had one of the Norwegian skiers, Jurgen Grav. He had finished seventh in the 10 kilometre mass start and was bristling with enthusiasm. Having skied the course prior to the 30 kilometre race, he knew what he was talking about and could take the viewer inside the mind and burning lungs of the skiers.

Those three made the job relatively straightforward. I owe them all a big thank you.

HISTORY OF THE UNIVERSIADE

The idea of a Universiade was first floated in 1891 by one Hodgson Pratt, a sturdy son of Somerset, but nothing came of it until the Germans set up the Academica which ran from 1909 to 1913. 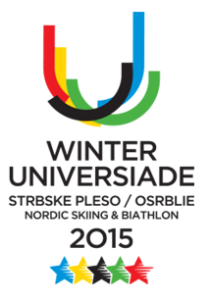 It then took a Frenchman Jean Petitjean to set up the International Universities Championships in 1923. Various name changes ensued before the outbreak of war in 1939 closed that chapter.

Current governing body FISU came into being in 1949 and ten years later the first Universiade was held, one which included East European athletes. It has been going every two years since then.

The students are fresh-faced (must be the mountain air as I don’t remember my colleagues in Dublin in the 1980s enjoying the same rosy pallour) and eager. Some though are better than others. For example, the USA which has such a strong collegiate sports programme doesn’t send its best athletes, Britain only sends athletes it thinks are contenders while the Norwegians, who clean up on the World Cup circuit, struggle with the timing.

The Universiade in Slovakia coincided with the Norwegian Games which are a must-attend for anyone with aspirations of climbing the icy pole to World Cup and World Championship level.

In contrast the Russian team included a number of Olympians and World Cup regulars; their mission wasn’t the taking part, it was the winning.

One of the technical aspects that I needed to pick up quickly – at least in part – was the idea of waxing the skis, for grip and for glide.

Randy Gibbs took me into his waxers’ hut (there is a shaggy dog story there if you look hard enough) and walked me down a row of skis, lovingly caressing the grooves on the underside of each. Different parts of the ski requiring different types of wax, different grades, worked into the grooves and fireblasted to harden them.

I am not going to get into the tech talk as it will be too baffling (for me, not you) but it is a remarkable part of the sport that I had never considered.

Of course, talking about how some of the ladies have had problems with their waxing (as I did) can also get you in trouble although I suspect it is a mistake a commentator only makes once. The danger is that you can try to dig yourself out of trouble. Inevitably this results only in more digging. If I have learnt anything behind the mike over the years it is that sometimes shutting up for a few moments is quite the best way out of a hole.

According to family reports my grandfather was tea-total, although in his book Two Winters in Norway he admits to enjoying a glass of Madeira from time to time.

Quite how he managed on the ski slopes without the Norwegian equivalent of vino varena is anyone’s guess. Mulled wine, spiced and piping; the perfect way to fast-track some adrenalin, warmth, life itself back into your veins amid the snow and wind. All for one euro.

Slovak beer also features largely après-ski. The Czech beer from across the border has broken out to an international order (the American brand Budweiser once allegedly tried to suppress the Czech beer of the same name on a brand copyright issue) but the Slovak beer is less well known.

It is just as feisty though. And clean. And cheap. Around 1.50 euros for half a litre.

If he was tea-total I am not entirely sure that Arthur Edmund would have approved of his grandson doing his best to support the local industry.

Strbske Pleso isn’t a big place. Beyond the hotel, where the food was institutional at best, there are approximately three restaurants in which to eat. None, strangely, is listed in The Vegan Guide to Europe.

That made for a lot of garlic soup and potatoes. Apologies to my co-commentators if the breath was a touch waxy. I blame the vampires.

But that of course is another…

THE DIFFERENCE A CENTURY MAKES